It’s easy to feel angry towards those who don’t follow Covid-19 guidelines.

Yet empathy is the key to changing people’s minds. 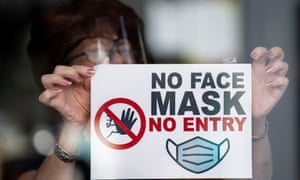 ‘Face coverings are compulsory in indoor settings but enforcement of the rules by individual businesses and institutions seems, putting it kindly, erratic.’ Photograph: Matthew Horwood/Getty Images

“I have asthma by the way,” a woman announced to me in my local cornershop this week. I hadn’t noticed her. She wasn’t wearing a mask; I was. “It’s OK!” I said, without a beat. She replied: “Just saying before you told me off for not having a mask.”

I wanted to avoid conflict in a small space. In truth, I panic seeing uncovered faces in shops. I, too, have asthma, but in my experience, wearing a mask for three minutes to buy tinned tomatoes has not been at odds with this. The woman in the shop bothered me, but it can be hard to feel that reasonable conversation is possible in such moments. She was poised for confrontation. I was knackered. What would a calm conversation have looked like?

Face coverings are compulsory in indoor settings but enforcement of the rules by individual businesses and institutions seems, to put it kindly, erratic. In my local shop, the till is behind a plastic screen, but the owners don’t enforce face coverings at all – despite the glaring sign out front. The sense of responsibility, then, is rooted firmly with the individual. This creates complex interpersonal dynamics.

Robust research shows that wearing a mask contributes to a large reduction in risk of infection. Researchers hypothesised earlier this month that masks could be a crude vaccine against Covid-19, rooted in the (unproven) idea that wearing a mask may expose someone to amounts of the virus that trigger a protective immune response. Masks are also linked to less severe illness: researchers have documented symptomless breakouts in venues such as cruise ships, where almost everyone was masked. In crowded spaces where masks are mandatory, infection rates seem to fall.

We all know they’re uncomfortable, sweaty, restrictive and bad for our skin (I’ve had a “moustache” of upper-lip spots for some time), but there is abundant evidence that points to the benefits of wearing them. However, when the decision to wear a mask depends on an individual’s appraisal of the risks, interactions can get emotional.

“Social groups have also been creating and reinforcing their own norms around masks through subtle and not-so-subtle pressures and expectations,” Dr Robert Klitzman, professor of psychiatry at Columbia University, wrote in the New York Times – an observation that will ring true for many. When our values are questioned, it can provoke defensiveness. “I’d like you to wear a mask when you get the bus,” may be heard as, “I think you’re irresponsible and I’m cross with you.”

The fact is, many psychological factors contribute to someone deciding to wear a mask. People vary dramatically in how they judge and accept risk, depending on what information they’ve been exposed to. Norms can take a while to shift in communities. If someone has had direct experience with coronavirus, it will affect their decision-making. For example, young people may have known fewer people severely affected by Covid-19 and have less concern.

Research suggests that the more people see others wearing masks, the likelihood of them wearing one themselves increases. The more exposure, the more normal it feels. As a species we are inclined to fit in with one another; we want to be accepted, not shunned. This feeds into the role stigma plays in the mask conversation – particularly, it seems, among men.

My Twitter feed remains heavy with people complaining that it’s mostly men not wearing masks. I have moaned, too, but was interested to read the evidence explaining why some groups of men are more likely to not wear a mask, particularly younger, politically conservative men, those who align with traditional views of masculinity or have lower health literacy. Such matters are not helped by public figures such as Noel Gallagher dismissing masks as pointless.

If we are wedded to our masks, it’s easy to feel angry towards those who aren’t. But becoming more aware of our emotional responses is probably the key to affecting change. Shaming someone, whether it’s online or in a tube carriage, will probably be counterproductive. (Dismissing someone’s position as groundless is one of the least effective ways of communicating public health risks.)

How people follow public health messages is predicted by trust: if we don’t trust the messenger, we won’t believe it. With this government’s erratic communication, trust is rapidly disappearing. Considering what is at stake if people start binning their masks, it can be hard to remain composed. But we’re more likely to be listened to if we soften our judgment.

When epidemiologist and Harvard professor Julia Marcus wrote about male anti-maskers with a marked lack of shaming, several men got in touch with her who were open to hearing her views on masks. There is a lesson here. Defensiveness makes others less willing to listen and process information. If we wholesale condemn someone’s view, they may unplug from the conversation and, as has been observed in anti-vaxxers, double down on their beliefs.

Living in a pandemic means we’re all stressed, emotional and more likely to be in fight-or-flight mode, which affects how we communicate and hold information. But it feels imperative to try and navigate these thorny issues with empathy if we can.

Communicating well often hinges on preparation, but we won’t always have time. If I am on the bus and see someone with their mask around their chin, or someone in a shop with a bare face, what do I want to achieve by speaking to them? I want them to think about wearing a mask. If I give them a flinty glance then jump in to tell them off – just as I suspect has happened to the woman I met in the shop at some point – the reaction will probably be negative. Maybe a better aim, if we want to go there, is asking questions and listening. There is tremendous power in feeling validated. If someone feels safe to speak, they may feel safe to rethink, too.